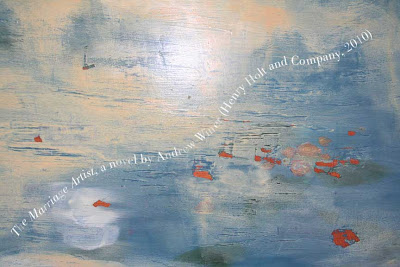 One of the pleasures of writing and publishing online is the freedom it gives me to write about art and books and movies without the implicit obligations of the “critic” writing for the print media. In part it’s that old “thumbs up, thumbs down” mentality that signals “see this, don’t see that” or “read this, skip that” to its readers. In part, too, it’s the expectation of “objectivity” on the part of the reviewer, no more than a conspirational wink, really, since we all know that objectivity is a myth. For the most conscientious of critics, this would preclude writing about friends.

So I declare myself free to write without embarrassment about the work of a family friend. His name is Andrew Winer, and he has just come out with a second novel, The Marriage Artist, a book that is remarkable for its audacity and seriousness of purpose, as well as for its meticulous and lyrical delight in the English language. In many ways, it’s also a painful book, because its central and recurrent themes are the suffering we human beings inflict upon each other and the certainty and omnipresence of death. What emerges from the darkness, though, is the human potential for a nobility that transcends the suffering; or perhaps, rather, the fact that human beings are able to achieve a fragile nobility through the experience and the authentic examination of suffering and its causes. Perhaps the greatest tool we have at our disposal to achieve this purpose, as Winer’s book suggests, is art.

Let it not deter us that death is at the core of The Marriage Artist. The story begins and ends in death. Following two narrative strands, one present day, one historical, it investigates the death of two artists, their consanguinity and the mysterious, tragic mirroring of their lives and work. From contemporary New York, Winer takes us back to pre-World War II Vienna — convincingly evoked in haunting descriptive passages where the plight of the city’s Jewish community becomes more and more desperate as the Nazi plague takes root and spreads its vicious poison. He leads us, eventually, into the bleakest of all imaginable places, the heart of the Holocaust, where life is reduced to the barest thread in the dark mantle of death, and humanity to the struggle for the last breath of life.

What is a “marriage artist”? This one is a boy who discovers in himself a genius for making ketubot, beautifully decorated Jewish marriage contracts that record not only the bare fact of the union of two people, but summon the very souls of the couple who commit to each other in this way; a boy who becomes a man tormented by that peculiar genius and the expectations it creates, and by his creative gift as a great painter whose subject matter is the ecstatic physical union of human bodies in the sexual act. He’s a man tormented in his own marriage, and by the Jewish heritage rejected by his tenuously assimilated father. He’s a man in search of the truth of his identity as a Jew at an historical moment when to be a Jew is to be publicly excluded, spurned and eventually exterminated by the all-powerful forces of evil in the external world.

But it’s the internal world that preoccupies Winer. He writes of a succession of marriages, whose participants are in constant inner conflict between passionate love for each other and, yes, equally passionate hate. The very words “hate” and “hatred” stalk these pages with a power that frightens and appalls. The Nazi hatred of Jews is tangible, and given expression in scenes of dreadful cruelty and violence. But, uncomfortably, there is also real hatred and cruelty, self-hatred and self-perpetrated acts of cruelty between Winer’s characters, pitting them against themselves, against each other and against the world. He pushes their relationships, at times, beyond credulity, to the point where the reader stops to wonder whether people really treat each other with such open anger and contempt. At such moments, I was rescued from my disbelief by the intuition that what we’re asked to bear witness to is not so much the actual human relationships with which we are familiar, in which we necessarily restrain our basest instincts, our innermost desires and thoughts, in order to maintain sanity and balance in our lives; but rather archetypal unions, viewed with a poetic license to venture into the darkest corridors of the human mind to explore their depths. This is a lyrical novel, after all, whose metaphors and rhymes and rhythms work as powerfully as its narrative to carry us along.

I admire Winer’s daring to address profound questions here, as well as his willingness to not find the answers, to allow the mystery of human behavior to proliferate. He wants to penetrate so deep into the human heart and mind that his prose often reverts — and at times, I’ll say, distractingly, for me — into long series of rhetorical questions, each one more unanswerable than the last. But he compensates with passages where the description of detail is breathtakingly precise. Consider this picture of a handshake:

He attempted to withdraw his hand but Carrigan maintained an unconscious clamp on it, which threw Daniel’s free hand into dire confusion: it moved to unfix its imprisoned sibling, but, to its utter horror, found itself established atop Carrigan’s wrist in a four-layer embrace that could only be described as intimate. The free hand propelled itself away with uncalled-for violence, before describing a ragged arabesque in the air and finally bivouacking on Daniel’s hip

All emotional and psychological perception aside, the precise physical depiction of this tiny event recalls Winer’s earlier training and practice as a painter. The observation and perception are both right on target. The same quality allows him, on a larger scale, to evoke landscapes and cityscapes that are fully as convincing, and which give the reader that persuasive sense of “being there,” in the picture, and sharing in the mood that they create.

One other thing needs to be said: to read the story is to be held captive by its multiple mysteries. The skillful intertwining of the two narrative threads keeps the reader always wanting to know more, awaiting the next revelation, knowing that we won’t know until the last pages how all these threads will come together, how these questions will resolve themselves, and yet pleasantly satisfied with each revelation as it comes, never in a hurry to get to that last page. There is — I’ll not reveal it — a climactic scene, followed by a spare and elegiac incantation that seeks to lay to rest the troubled souls the book has touched upon, and both of these serve to leave the reader satisfied that the journey, painful though it may have been at times, was not in vain. We have learned a great deal more about our own humanity along the way.

So, yes. Thumbs up! And read it. Definitely! Peter Clothier is known chiefly as an observer of the contemporary art world, and as a widely published writer about art and artists.  He is the author of two novels, two books of poetry, a memoir, a monograph on the British artist David Hockney, and more recently a collection of poilitcal essays, The Bush Diaries.  His newest publication, Persist: In Praise of the Creative Spirit in a World Gone mad With Commerce, addresses the predicament of the creative individual in a culture in which celebrity and money too often count for more than talent and quality of work.  Currently, Clothier’s blogs, The Buddha Diaries and Persist: The Blog command an international readership.