A Book Review: Choosing To Be

We receive our life-lessons in often less than comfortable or welcome ways. A good part of our suffering is created by the need we develop early on in life to “be someone”–often at the unwitting urging of our parents, if not that of our social conditioning. We may take years to build an identity (well, several of them, really) in order to satisfy that inner need. And then that identity becomes who we are, a role we unthinkingly act out until something comes along and hits us in the gut; by which time it is so hardened as a “reality” that it is difficult or impossible shake without further suffering. 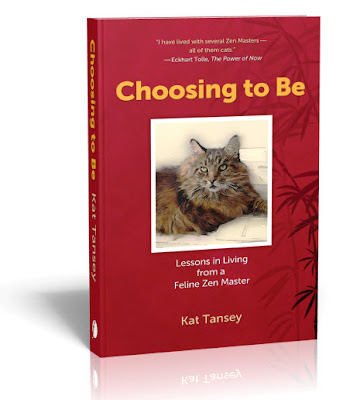 Kat Tansey’s Choosing to Be: Lessons in Living from a Feline Zen Master (Findhorn Press, 2010) opens at just such a moment of painful realization. A successful woman thus far in her life in the business world, she was brought low by chronic fatigue syndrome and debilitating depression, and the identity by which she had defined herself until that moment imploded. In her first chapter, “Deciding to Stay,” we find her desperately searching for some reason not to end the agony by taking her own life. She begins to find it in The Tibetan Book of Living and Dying, picked at random–no, of course not at random!–from her bookshelf; and in the subsequent conversation she engages with her Maine Coon cat, Poohbear Degoonacoon, the Zen master of her title.

This is the beginning of the journey that her book describes. It proceeds in the form of a personal narrative and a continuing dialogue with Poohbear, in which Kat (I’ll call her by her name, because this is an intimately personal book) slowly discovers for herself the healing potential of the Buddhist path of meditation and compassion.

Let’s get the cat thing out of the way, because it brings immediately to mind the specter of cute animal/people stories. Well, no. Dispel that notion. Poohbear–his name notwithstanding–has all the gravitas of the personal guru that he is for Kat. He does not do cute, nor would she allow it. Even the playful kitten, Catzenbear, who is brought in as a companion for the older cat, does not succeed in knocking him off his wisdom-center. The alter ego for the appropriately-named Kat, he speaks for her own innate wisdom, for the “Buddha mind” that opens in her as she begins to explore and acknowledge the limitations of the “ordinary mind” whose games have become unbearable.

Put simply, “Choosing to Be” is the story of one woman’s search for happiness. Kat is surprised, at first, by her discovery of the Buddha and his promise that there is an end to suffering if we go about seeking it in the right way. With Poohbear’s guidance–and soon also that of human teachers, Jason Siff and his wife, Jacquelin, of the Skillful Meditation Project–she develops a meditation practice and learns to watch her mind in action–frenetic action, to begin with!–and to tame its reactive patterns. She learns to recognize the hindrances, including the inner anger and sense of loss. When they come along to distract her, she digs persistently behind and underneath them, and discovers that these too can be overcome by the practice of patient, persistent mindfulness and awareness.

The useful thing about Kat’s book is that it documents each step along the way with enormous and compassionate attention to the detail of what is happening in her own mind. This is not a how-to book, like so many that preach the virtues of meditation. There is no instruction here–although there’s much to be learned. It’s an “essay” in the true sense of that word–an attempt, with words, to capture and describe an intensely human experience in all its transience and subtlety. It’s also the celebration of a struggle with the ego and its clinging habits, and of the discovery of joy that results from working through that struggle to attain a measure of wisdom. In this, Kat’s book offers us the model of a journey from which we can all take solace and inspiration as we pursue our own.