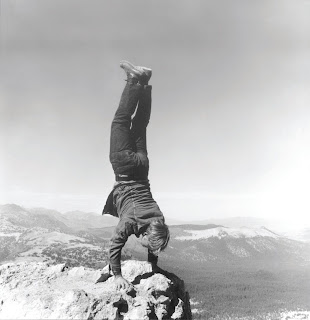 Robert Kinmont: 8 Natural Handstands, 1969/2009; nine black-and-white photographs; courtesy of Alexander and Bonin, New York. Photo: Bill Orcutt
Pacific Standard Time is ubiquitous these days. You couldn’t escape it even if you wanted to. Down here in Orange Country, where we have come for a week away from the city, there are a good number of don’t miss shows — including the one we saw yesterday at the Orange County Museum of Art. State of Mind: New California Art Circa 1970 was curated by Constance M. Lewallen and Karen Moss, and it’s a surprisingly comprehensive survey of the art growing out of the advent of “Conceptualism” in California. Surprising, because there was so much diverse activity at the time, with results ranging from the wildly funny (William Wegman, Paul McCarthy), to the absurdly irreverent (Lowell Darling), to the angrily and demonstratively political (the feminist artists, Chicanismo, the Vietnam war), to the socially conscious (Newton & Helen Harrison), and the perceptually challenging (Stephen Kaltenbach, whose “Raised Floor” was one of my favorites); and more often than not, a blend of all of them.
It was a moment, of course, when artists — particularly the young ones — were challenging every accepted notion about what constituted a work of art. They picked up where Dada had left off, in the 1920s, its energies channeled into the politer and more formally acceptable modes of Surrealism. 1970 was a mere ten years from the landmark retrospective devoted to the heritage of Marcel Duchamp at the Pasadena Art Museum. It was also the year that marked the transformation of L.A.’s traditional art school, Chouinard, a bastion of painting, sculpture and drawing, into the eagerly revolutionary, apostate CalArts at its new, temporary campus in Burbank. It was perhaps fortunate that Walt Disney had died a few years earlier; he must surely have been turning in his grave.

Not that CalArts was the only art school where ferment was happening. The University of California at Irvine was rapidly become another hotbed of dissent from traditional dogma — a story that is told at another Orange County venue, the Laguna Art Museum. And schools were not the only institutional targets of young revolutionaries: the perhaps not-so-venerable-after-all Los Angeles County Museum of Art, just recently divorced from the county’s Natural History Museum in 1965, was soon to come into the sights of neglected constituencies and their artists–African American, Chicano, women… No one, it seemed, was safe. 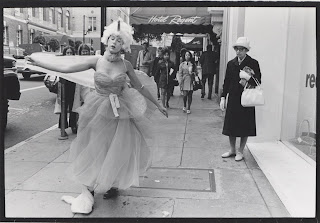 “State of Mind” will surely bring all this rousing history to mind, as you progress from gallery to gallery, each one recalling an aspect of the cheerful disorder. There’s the sometimes painful “Body Art and Performance” (Chris Burden’s “Shoot”… 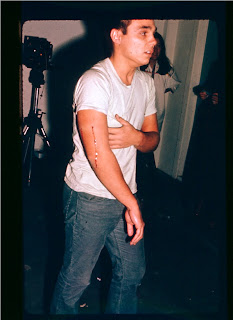 Chris Burden: Shoot, November 19, 1971; performance at F Space, Santa Ana, CA. Photo courtesy of the University of California, Berkeley Art Museum and Pacific Film Archive; gift of the Naify Family. Descriptive text for Shoot: At 7:45 p.m. I was shot in the left arm by a friend. The bullet was a copper jacket .22 long rifle. My friend was standing about fifteen feet from me.
… Barbara T. Smith, and others); “Public and Private Space” (Allen Ruppersberg’s “Grand Hotel”, Terry Allen), “Politics” (Martha Rosler, ASCO); “Perceptual and Psychological Space” (Paul Kos, Bruce Nauman, Kaltenbach); “Artistic Process, Language, and Wordplay” (John Baldessari, Tom Marioni, Wegman.) And for visitors too young to have been a part of it all, it’s an invaluable history lesson: they would not be doing what they are, no matter what form it takes, without this precedent. 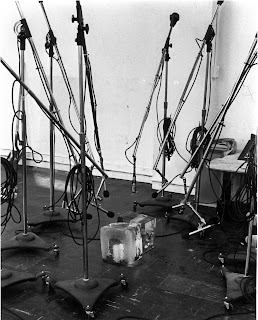 The show is also a tribute to the diversity and energy of art in California. An article about Pacific Standard Time in yesterday’s New York Times makes mention of the West Coast’s reputed inferiority complex vis-Ã -vis New York. It may be news to New Yorkers, but we left that behind a long time ago.

Also on view at OCMA is Two Schools of Cool, an exhibit that pairs the vision of a… well, older bloke (Llyn Foulkes, John Baldessari, Ed Moses, George Herms, Allen Ruppersberg) with that of a much younger, emerging artist — Stanya Kahn, Shana Lutker, Robert Williams, Sarah Cain and Amanda Ross-Ho, respectively.) An interesting idea, but one that I personally found to be more fun than informative. The results felt more arbitrary, somehow, than organic — the most successful, in my view, being the Foulkes/Kahn contribution… 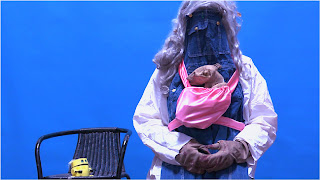 Courtesy of the artists Â©2011
… a blend of the weird and the wonderful, the banal and the horrific, of art and nature. It’s a show that usefully demonstrates the continuity I mentioned earlier. The past, in art, is not easily forgotten. Nor should it be.